It's only the second entry, and already this is getting hard. Bear with me, I'm a little rusty.

So, this being Sunday, and thus a day when I allegedly have a bit more time (this is going to be a killer week, it'll be interesting to see what I come up with), I suppose I should talk about what I did last weekend.

If you read the sidebar of that entry that was the last for a very long time, I mentioned that I'd committed to making Thanksgiving dinner for some friends. I was wary of the whole thing for various reasons, most of which boiled down to the fear that I would end up investing a ton of money and plain hard work in a dinner that would mainly consist of a bunch of Italians peering perplexedly at their plates with a scrunched-nose "Ew!" plainly stamped on their face.

I was determined to be organized about this event. I started about three weeks beforehand, working out what I wanted to make. There were the non-negotiable basics, of course: turkey, stuffing, mashed potatoes and gravy, corn on the cob, pumpkin pie. These needed specific recipes to go along with them, but what is Thanksgiving without the warm scent of sage and allspice wafting through the air? Just another turkey dinner.
(Not, uh, that we often have turkey dinners. Or ever, for that matter.)

So I went through all my cookbooks and recipe cards and the Canadian Living magazines Brenda sent me years ago, and did some online research, and a little thinking, and here's the menu I came up with:

I figured that should be enough for six people, even if some of the dishes went uneaten. (I was right.) But that was a lot of food, also considering that the only thing not made from scratch was the cranberry sauce. I knew it would take a lot of careful planning for a single person to pull it off. Even Superplin.

Thus, next it was time to draw up a military-style preparation schedule. I worked out exactly when I needed to buy what, which things I could make ahead and when, plus a down-to-the-minute schedule for Saturday (leaving a bit of a margin for flexibility). If I was going to do Thanksgiving, boy, I was going to do it right.

A week before, I ordered the turkey and made the chicken stock to use in the gravy and stuffing. The next day I made a loaf of cheddar cheese bread (made with a hideously expensive but to-die-for English cheddar, the only kind we can get).
What's that? You don't see cheddar cheese bread on the menu?
Of course not, we ate it. Hell, two of our guests hate cheese, they would never have appreciated it. We certainly did, though! It was yummy. Dario made me promise to make it again, someday, when we can enjoy it without the attached guilt.

Aside from the Cheddar Cheese Bread Incident, anyway, over the course of the week I did all my tasks, small and large, exactly as planned. I made sure I had everything I needed for the table, the right dishes and cookware. It was no simple matter finding something resembling a roasting pan that was both a) large enough to hold the 5-kg turkey we'd ordered, and b) small enough to fit in our puny oven. We did manage a compromise, but there were a few dark moments there.
We made a note that, if we ever get our own apartment and/or redo the kitchen, a larger oven is a necessity, not a luxury.

There was none of the taxicab drama of my last Italian Thanksgiving experience, happily. Well, actually, Dario did end up riding a bus with the turkey, but just as far as the parking lot. The turkey itself was both headless and footless, thank God, so it was much less traumatic to clean and stuff the bird. This was a huge relief to me, since for several days I had been having nightmare flashbacks to 15 years ago.

There were various minor glitches, like not being able to find cranberry sauce (but lingonberry jam from Ikea is a fair substitute, really, and none of our guests would know the difference), and having our toilet seat break that afternoon, requiring an unscheduled buying excursion. But for the most part, I kept to my schedule, worked through it more or less calmly (except the last hour or so, which was frantic with everything needing attention all at once, and I'd run out of places to set things down, and people were standing around talking and distracting me... still, not as bad as I'd feared), and avoided having the whole thing turn into an unpleasant chore. I had fun, it was a day of nostalgia and remembering and polishing my grandmother's silver and thinking about family, as well as a day of amusement at some of the things that confused people.

Our guests were quite entertaining. None of them had ever even seen a roast turkey in real life. They were surprisingly excited at the idea of having a Thanksgiving meal, just like they've seen in movies and on TV over the years. It was pretty gratifying to play to that kind of audience.
None of them had ever eaten corn on the cob, and I had to demonstrate how it was done. They were a little confused by the fact that there were no separate courses, but everything was to be eaten together (or not), however one pleased. "It's a holiday to celebrate freedom!" they said, which I thought was terribly cute. Dario had no idea how to carve the turkey, and made rather a mess of it--although I'm the only one who noticed (or cared), since none of them had ever seen it done properly.

It was interesting to see what people liked, and what they didn't. Overall, the cornbread muffins were not a hit ("They taste like grainy polenta," was the main complaint. Not surprising, really, since I'd made them with polenta flour.). Cristina didn't like anything that had maple syrup in it, which of course cut out the vinaigrette, and the Vermont fruit, and the warm praline sauce. Dario confirmed, once and for all, that he really and truly does not like stuffing of any kind, at least not any of the kinds he's ever tasted. He feels terribly guilty about this, but what can you do? The pumpkin pie met with a much more successful reception than I'd imagined, as did the gravy. Italians who visit the US always complain that there are too many sauces on everything, so I never dreamed they'd take such a liking to gravy. Fabio begged me to make more, and I had to explain that it was simply impossible. He was very disappointed.

Everyone loved the rest of the menu, and I was easily able to send some stuff home with them, which kept us from having to deal with tons of leftovers. The atmosphere was nice and relaxed, there was pleasant conversation and good wine and they liked the food and the next day, I could hardly move from exhaustion. I had sore muscles in my legs and shoulders from hours of crouching and bending and lifting, but I also had a lingering sense of satisfaction that made it all worthwhile. It was a huge boon to my confidence--and nowadays, that's something I can definitely use.

Of course, just making dinner wasn't quite enough. This is me we're talking about here, after all.

It occurred to me on Thanksgiving Day (the real one, Thursday) that my guests probably didn't know a lot about the holiday. They might not even know its origins. I knew I'd be busy, especially when they first arrived, so I came up with the bright idea of putting together a booklet to explain the history of Thanksgiving, what the Pilgrims ate, what foods are traditionally eaten on Thanksgiving in the US, and a copy of our menu.

I researched and wrote and formatted the thing in 5- and 10-minute intervals over the course of Friday and Saturday. Dario read it to me while I was making the stuffing, and we edited it together. I printed it up and stapled it in between chopping fruit and basting the turkey and whisking salad dressings. It was an integral part of the whole Thanksgiving experience--and it turned out to be quite useful, since indeed no one really knew what it was about.

(No, there's no real reason why I called it, "A postmodern retrospective." I just thought it was amusingly pompous sounding for such a silly little booklet). It ended up running eight pages, which was a little longer than I'd originally planned--but one has to be thorough, right? 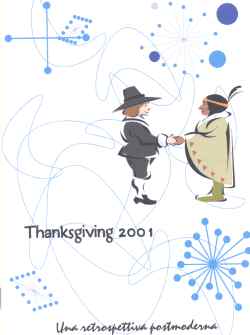 I could've made it longer if I'd exercised less restraint. There were a bunch of things I didn't know myself, like that the Pilgrims ate seal.
(My guests were disappointed when I told them that seal did not feature in our own Thanksgiving menu.) And did you know that Thanksgiving is actually declared every year by the President? There's a lot to say about this holiday, dammit--eight pages is nothing.

So it was that the Parisini household celebrated its first-ever Thanksgiving right here at home. We were thankful that it all turned out well, that the food was eaten and appreciated, and that there was no having to deal with beady turkey eyes. We were thankful to have friends to share it all with, and a cat to help us disposed of any unwanted scraps of turkey.
And we were especially thankful at the end, when Cristina insisted on staying to help us wash every single dish, fork, spoon, platter, and pan in the house. We finished at 2:30 a.m., thankful it was finally all over.